Huston School of Film and Digital Media - on YouTube 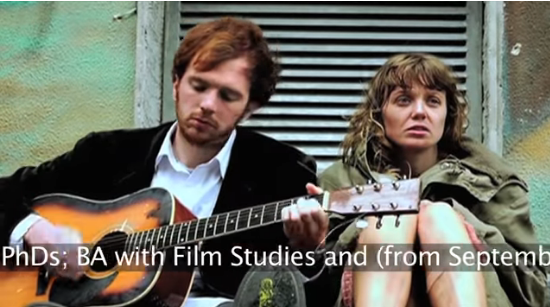 Irish Film Institute (IFI) -  (formerly the Irish Film Centre), is both an arthouse cinema and a national body that supports Irish Film heritage. It maintains an archive of Irish films and provides education in film culture.

Irish Film & TV Research Online - Irish Film & TV Research Online is a website designed to bring together the research material relating to Irish-made cinema and television as well as to Irish-themed audio-visual representations produced outside of Ireland. It also incorporates historically important silent films made in Ireland and provides an insight into the official response to foreign cinema in Ireland. It incorporates three searchable databases: Irish Film & Television Index 1896-2006; Irish Silent Films 1910-15; and Irish Film Censors' reports, 1923-1938. The project is based in the School of Creative Arts, Trinity College Dublin

American Film Institute (AMI) - is an American film organization that educates filmmakers and honors the heritage of the motion picture arts in the United States.  The AFI Archive includes an authoritative record of the first 100 years of American film.

Filmbase - Founded in 1986 as a members’s-led organisation, Filmbase has supported thousands of Irish filmmakers over the years through their range of services including training, access to film funding award schemes, equipment hire.

Film Ireland - As Ireland’s only dedicated film magazine, Film Ireland magazine provides a fantastic archive of information on Irish film over the last two and a half decades.

IMDb - a searchable database of more than 185 million data items including more than 4 million movies, TV and entertainment programs and more than 6 million cast and crew members.